The "Dame" by Heinz Zolper - a metaphor for Love and Respect 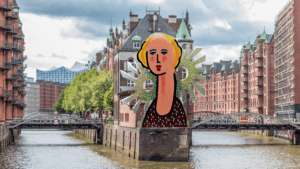 Dame sculpture in front of Speicherstadt Hamburg, draft by the artist Heinz Zolper

In a recent symposium on feminism and gender discussion in preparation for World Women's Day 2020, Heinz Zolper once again drew attention to the importance of holistic social life. He gave a clear rejection to dominance outside of a factually and ethically responsible context. Authoritarian claims to power and, in the near future, mechanisms of oppression may have no place in an enlightened world. They are an anachronism, which, however, makes it very clear how bad things are in terms of education and societies and groups.

Worldwide - and especially in large areas of the so-called western hemisphere too - women and other less re-presented social groups have no fair chance to participate independently in common life. Ultimately it is not enough to privilege only individual women through promised management positions. As long as existing systems only change some figures, but do not take into account a consolidation of the biological and psychological requirements and goals of all parts of society, the previous functional orientation remains unchanged. Therefore, quota regulations should only be made as a minimum requirement in the form of unimpeded and directly enforceable rights; everything else ignores the interests of girls and women, but also of other disadvantaged groups (such as children or minorities). The status quo can only be improved in terms of equality and enforceable rights for all. Because what good is it to exchange individual person on defined positions, but to maintain an unjust system. Respect for women, but generally respect for all creation, requires clear rules and visible signs of warning and reminder. However, respect can only really arise where is a place to develop self-confidence and an understanding of the need for love. Of course, this requires a process of learning and understanding - for those who are affected as well as for people who prevent this - doesn't  matter  fee it out of malice or stupidity. Such a process requires appropriate space and security, otherwise it cannot develop. In order to avoid polarization, it is also important to understand that actual or supposed claims will cripple the personality of the practitioner and generally reduce his chances of positive participation in life. Ultimately, it doesn't matter whether it's male, female or childish - what matters is the diversity of life. Caution and respect for one another is a basic requirement for all social interaction and every sustainable life. Disregard and disrespect, no matter by whom, are anti-social. The pursuit of these goals can only be achieved through a paradigm shift in everyone's mind if we want that our behaviour will be shaped by love and respect. Of course, this includes generally social ostracism of disregarding or even abusive behavior and actions. And these limits must apply to everyone, regardless of gender and age; and they shouldn't stop at the economic interests and of course enclose our earth with all it's creatures.

The "Dame"-sculpture - a must project for public spaces

The artist Heinz Zolper (* 1949) has been pursuing these goals for nearly half a century. And he has created an adaptable metaphor for his discourse: the so-called “Dame” portrait - which he wants to put more in the public eye as a symbol that is visible from afar. When Zolper hopes for love and demands respect, he trusts nothing more than on a process in the word's true meaning. 'Re-looking' as a literal translation of the Latin respectio refers to the repeated consideration and thorough assessment of a new impression in order to avoid the limited and superficiality of the first glance. Only a constant questioning of our own actions and our immediate perspectives can lead to the recognition of the rights of the other. Only thus can effect respect for the other and our environment. However, where love and respect are lacking or not given enough attention, everyone ultimately loses, regardless of the supposed position of power. That's the reason why Zolper's "Dame" is not just a multifaceted sign of the demanded respect for women, but a reminder and monument for the incompleteness of people and for social interaction. The artist, whose painterly work has accompanied the Winter Foundation for many years, wants his "Dame" sculptures  to be understood as a memorial in public space to inspire and motivate us for our daily life. (pm)

Compare also: Fragments from now. For an unfinished future, Bundeskunsthalle, Bonn, March 20. - May 03.2020